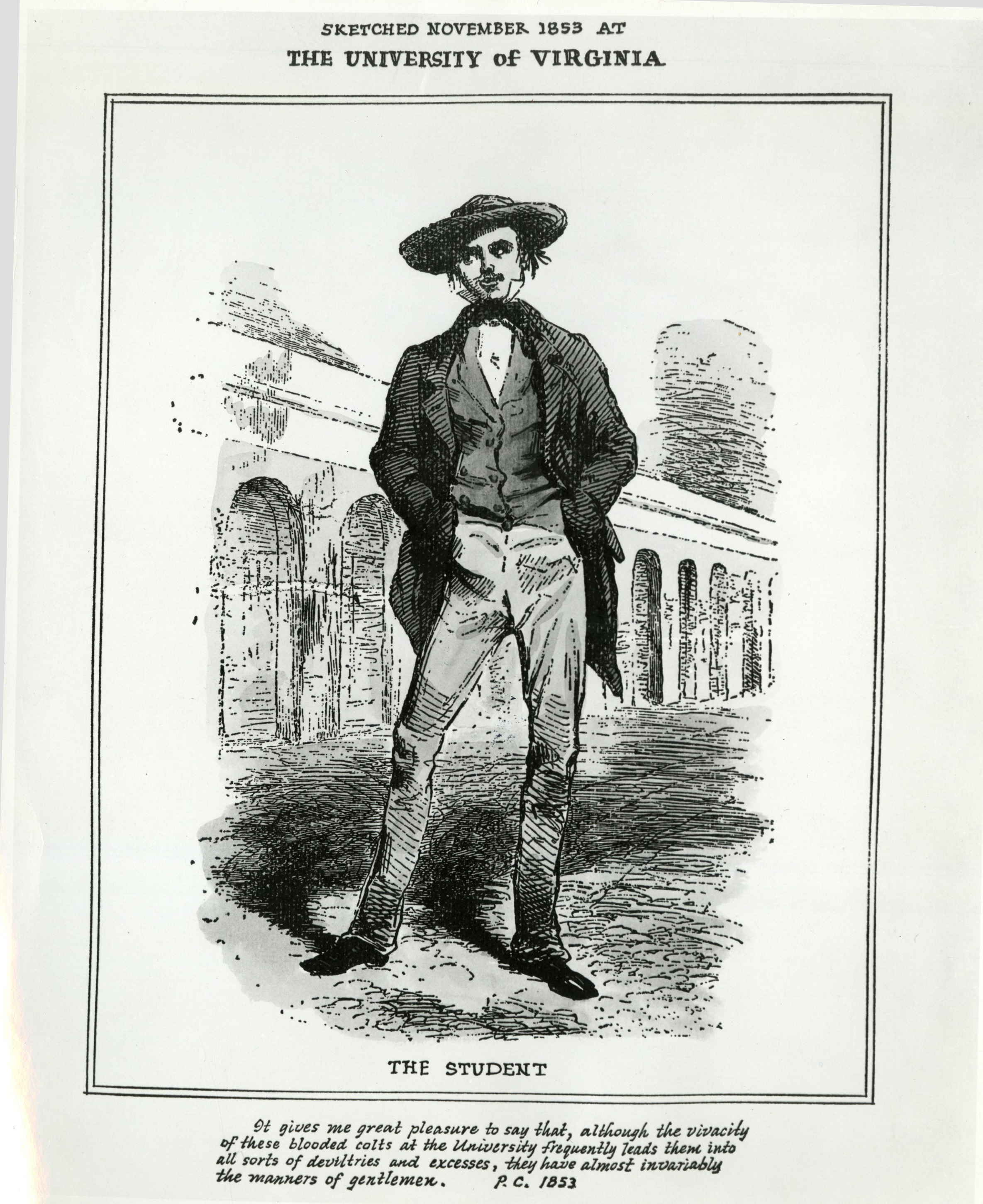 The Student (1853): Courtesy UVA Special Collections Library [uva-lib:2163497]
“To ignore [acts of lying, cheating, and stealing] committed by another student is to make one an accomplice and equally guilty of a violation of honor.”

The Honor System evolves with each successive generation of students. Many alumni lament the 1979 disappearance of the “non-toleration clause” from Honor statutes. “To ignore [acts of lying, cheating, and stealing] committed by another student is to make one an accomplice and equally guilty of a violation of honor”. 1 For decades, versions of this clause greeted new students, nestled securely in the first paragraphs of the iconic Honor “Blue Books” which introduced young Wahoos to the Community of Trust. It inspired their pledge to not lie, cheat, or steal... nor tolerate those who do. Part clause - part compact - it simultaneously reflected both the storied origins and tacit obligations of honor at the University of Virginia.

In 1842, it was former U.S. Representative and judge-turned-professor Henry St. George Tucker who first proposed that University students pledge the integrity of their academic work.2 But it was University students - the southern sons of an antebellum aristocracy - that first infused the Grounds with a sense of ‘honor’. Barely recognizable by today’s standards, their bellicose honor was bullish demand for respect, undergirded by an hubristic ego which compelled an immediate response to external threats. Authors Bowman and Santos describe them as “reflexively violent” and prone to conflict:

“With a sense of honor easily bruised... the wrong word, the wrong look could easily lead to a scuffle, if not a duel... The students brandished guns freely... secreted dirks and daggers and, with little to no thought and even less hesitation, stabbed each other.” 3

The entire Honor System developed around a simple concept: when honor is violated, one must respond.They were culturally compelled to act. By the time of the Civil War, University students began to exact less violent penance for breaches of their collective code and increasingly protected their right to do so. During the Reconstruction, Ayers (1991) notes that Southern honor shifted from “a system of values within which you have exactly as much worth as others confer upon you” to a less dependent system where “character and honor depend upon a man’s own life and conduct; not upon what another may say of him”.4 Students slowly internalized this less fragile, less volatile sense of honor but continued to confront infractions with the agonistic bravado of years past.

In 1978, the University of Virginia Honor System had grown from hot-blooded compulsions to a ritualized institution, championed by the Honor Committee. But in the 136 year history of the Honor System - not much had truly changed. When a student of the 1970s suspected a violation of the Honor Code, they were expected to investigate, confront the student, and demand an explanation. “If, after hearing his explanation, (or after he has refused to give an explanation), the investigators are still convinced of his guilt, they shall accuse him of an honor offense and demand that he leave the University”.1 It is easy to understand why this conversation was termed a “Confrontation”. Upon accusation, a student had two options: “either leave the University or request through the President of his school that an honor panel be convened to try his case”.1 Clearly, the procedures of the 1970s Honor System were the living descendents of 19th century Southern honor. The entire System was built around direct accusations and toleration was not an option. Did this vestigial hostility - codified aggression baked into a compulsory clause - have a place at the modern, integrated, coeducational University?

Arguments against the non-toleration clause sometimes focus on the rights of the potential accuser: “Is a person who does not report an honor violation necessarily dishonorable? If such a clause exists, does not the system then impinge upon the rights of the student to decide whether or not he should act and what his response should be?”. 5 Others acknowledge its enforce difficulty “[due] to the lack of physical evidence that accompanies a case of toleration”.5 In fact, the 2018-2019 Honor Committee has not found any evidence indicating that the clause has ever been enforced at a hearing (that does not, of course, preclude the existence of such evidence). Honor Committee research conducted in 1993 found that skepticism and philosophical opposition to the clause mounted, particularly as the United States navigated the cultural revolutions of the 1960s and 1970s. “Historical accounts reveal that [the non-toleration policy] was followed at Virginia until approximately 1969, when it became widely unenforceable”6 as fears over the Vietnam draft, and the fate of dismissed students, intensified.12

On April 15th, 1979, the Honor Committee voted to soften the Blue Book language from:

to the less condemning;

By the time the 1979-1980 Blue Book was printed, the clause had been removed entirely.8 Honor Committee members of the 1980s made dire predictions in the wake of its removal. “[If] students try to enjoy the benefits of the Honor System without assuming their responsibilities ‘then the Honor System is eventually just going to crumble away’”.9 A contemporaneous student agreed: “[Neglecting] to report offenses constantly undermines the system... if we allow people who commit dishonorable acts to remain in our midst, then do we not, in effect, promote dishonor?”.9 Reporting trends do indeed show decreased reporting rates in the years immediately following the removal of the clause but they seem to recover shortly thereafter.10 Surprisingly, given the removal of a broad reporting mandate, lay student investigations persisted, in some form, for another sixteen years until 1996 when the Honor Educator, Adviser, and Counsel roles were amended such that trained Counsel gained the sole authority to “investigate thoroughly and impartially a possible honor offense”.11

Student reporting rates continue to frustrate faculty. A 2001 survey revealed that “[of] the students who said they were aware of an actual honor violation, 95.4 percent said they did not report it”.2 In 2005, “[the] Faculty Senate voted unanimously to recommend reinstatement of the non-toleration clause” but the Honor Committee chose not to revive it.2 From 2012-2017, at least 76% of cases were collectively reported by professors (61%), teaching assistants (12%), and administrators (3%) with less than a quarter of all cases reported by students.10 The implication of recent data relative to past reporting rates is difficult to assess. Before the advent of Honor-trained student investigators, suspicious faculty recruited students to investigate and confront dishonorable behavior. The “reporter” for many of these archived cases is therefore identified as a student when, in reality, the case originated with the faculty.

The power of the non-toleration clause never rested in its practical applicability. Like the Honor System itself, the clause was an ideal, reminding us of our obligations within a self-governing Community of Trust. That spirit of responsibility survives today. In 2019, the twenty-seven members of the Honor Committee maintain a pool of one hundred Support Officers trained as Advisers, Counsel, and Investigators. All reports received by the Honor Committee are investigated by students; students continue to make formal accusations on behalf of the Community; students decide the guilt of their peers at hearings; and students determine the significance of their transgressions. Tolerance of any given behavior - even behavior as problematic as complicit inaction - is not the same as acceptance of that behavior. Shedding the mandate of the non-toleration clause, replacing Confrontations with more thorough investigations, and adopting the Informed Retraction all signal the current student body’s belief in the power of due process, contrition, and rehabilitation to continually strengthen the Community of Trust - which is something we should all be able to tolerate.