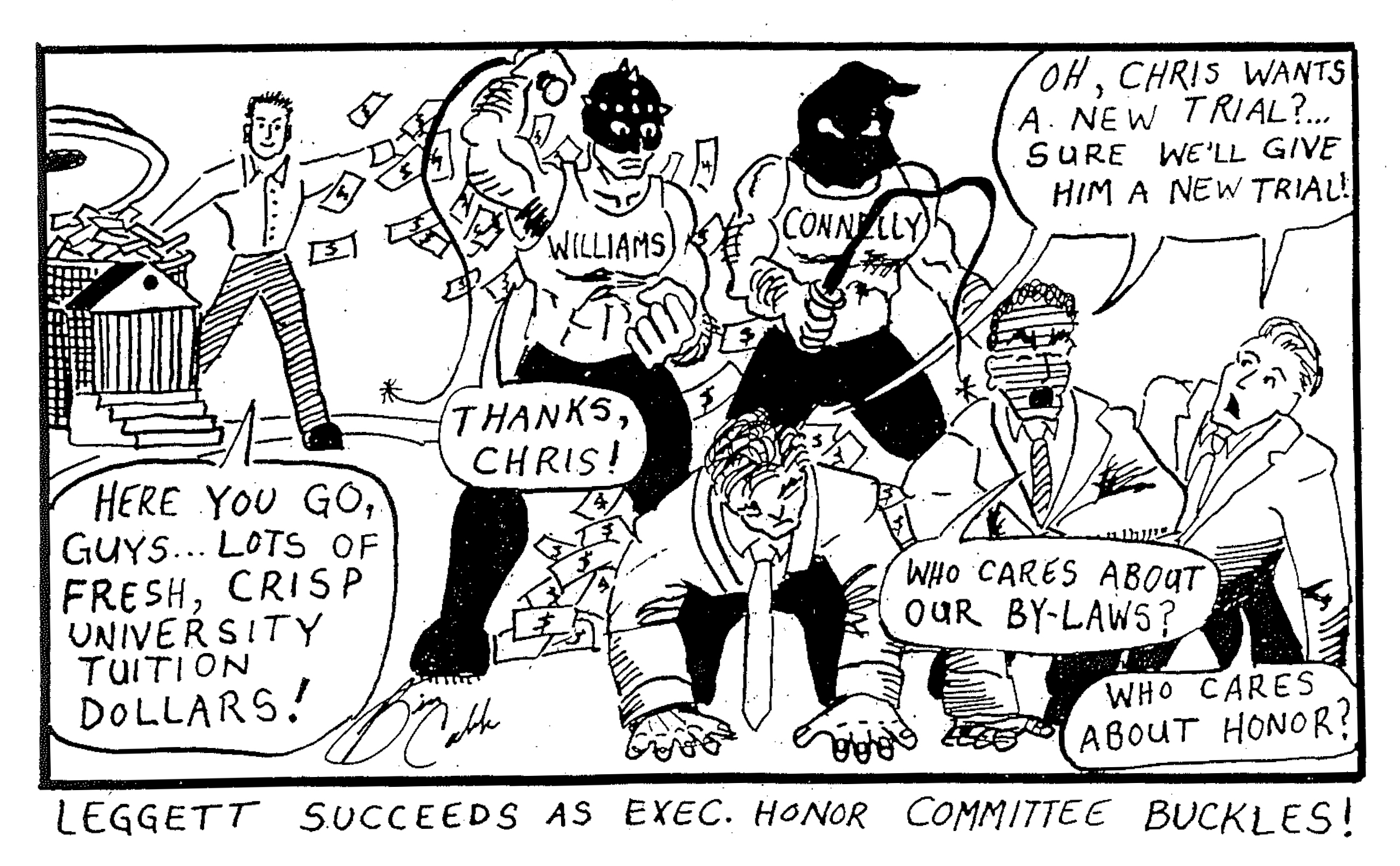 In April 1992, Christopher Leggett was accused of cheating on a computer science exam. [4] In February 1993, he was found guilty and permanently dismissed from the University. [4] He subsequently submitted an unsuccessful appeal. [2] Unable to secure a retrial, Leggett turned to Williams and Connolly, a high-profile law firm in Washington D.C., and mounted two more unsuccessful attempts to gain relief from the Honor Committee. [6] [2] In May 1994 - after Leggett threatened to sue - a newly elected Honor Committee, the Board of Visitors (BOV), and University administration settled out of court, granting Leggett a retrial and covering $40,000 of Leggett’s legal fees. [7] The student body grew concerned that the new Committee had folded to legal and administrative pressure. In July of 1994, Leggett was found ‘not guilty’ by a panel of his peers at his retrial. [8]

The interim between Leggett’s first and second trial, as well as the months following his acquittal, were marked by rampant rumors, internal Honor Committee conflict, and intense community debate over the role of University administration... and the security of student self-governance. Much of the unrest can be attributed to speculation about conversations between Leggett, his lawyers, the BOV, University President John T. Casteen III, and the Honor Committee between February 1993 and July 1994.

President Casteen released an open letter to the University community in September 1994 to “set the record straight” and address many of the concerns raised by students. [2] He derided the “selective leaking of information by former Honor Committee officers,” attributing much of the fodder for student concerns to the confusion resulting from only hearing fragments of the whole story. [2] He asserted that “the current members of the Honor Committee made their own decision that fundamental fairness demanded a new trial for Christopher Leggett,” and cautioned students not to “expect easy answers to hard questions”. [2] Thus, students’ allegations of administrative pressure were met with commensurate denial by both the Honor Committee and the administration. The truth of the matter remained deeply disputed.

The Leggett case and its retrial, from the initial outcry to the reporting of the 1994-95 Executive Committee, spurred numerous changes to the Honor System. These changes, nearly all of which are still in place today, addressed issues of executive power, procedural accountability, and conflicts of interest.

In Leggett’s initial hearing, a failure to assign adequate representation to Leggett was attributed, in part, to adversarial behavior by a Counsel. [2] In response, the Committee made Honor trials less adversarial by allowing the student panel to question and cross-examine witnesses before Counsel, as opposed to the prior Counsel-first precedent. [3] [12]

The Leggett case also raised concerns about the Executive Committee’s role in making decisions about cases in which they, themselves, were the reported students. Two integral changes were made. First, the BOV passed a resolution stating that:

“[The] Honor Committee is not empowered to consider charges or institute disciplinary proceedings against former, current, or future members of the Honor Committee that challenge or otherwise assail decisions made or actions taken, after consultation with the President or the General Counsel of the University, by such members in the performance of their duties as agents of the University with respect to the administration of the Honor Code or the adjudication of specific disciplinary cases.” [10]

Second, the Honor Committee later implemented a policy to address cases regarding members of Honor to which the BOV resolution does not apply - stipulating that such individuals cannot make decisions on cases for which they were the accused student. [1]

The Leggett case highlighted critical issues with Honor Committee operations as well as the Committee’s relationship to the administration, the student body, and between its own members. Even twenty years after the case, it is still difficult to discern the Executive Committee’s precise motivation for granting a retrial. However, it is clear that the case shook the foundations of Honor Committee procedures and Honor’s place within the Community of Trust. The Committee took lasting measures that addressed its failures and ensured the best possible future service to the University community. Faithful adherence to the values of responsiveness and improvement continues to undergird the Honor Committee’s actions today.

[9] Mason, L.R., Jr., Galiotos, T.A., & Manno, K.M. An Open Letter to the University of Virginia In Response to the Statement from the Rector and Board of Visitors [open letter].