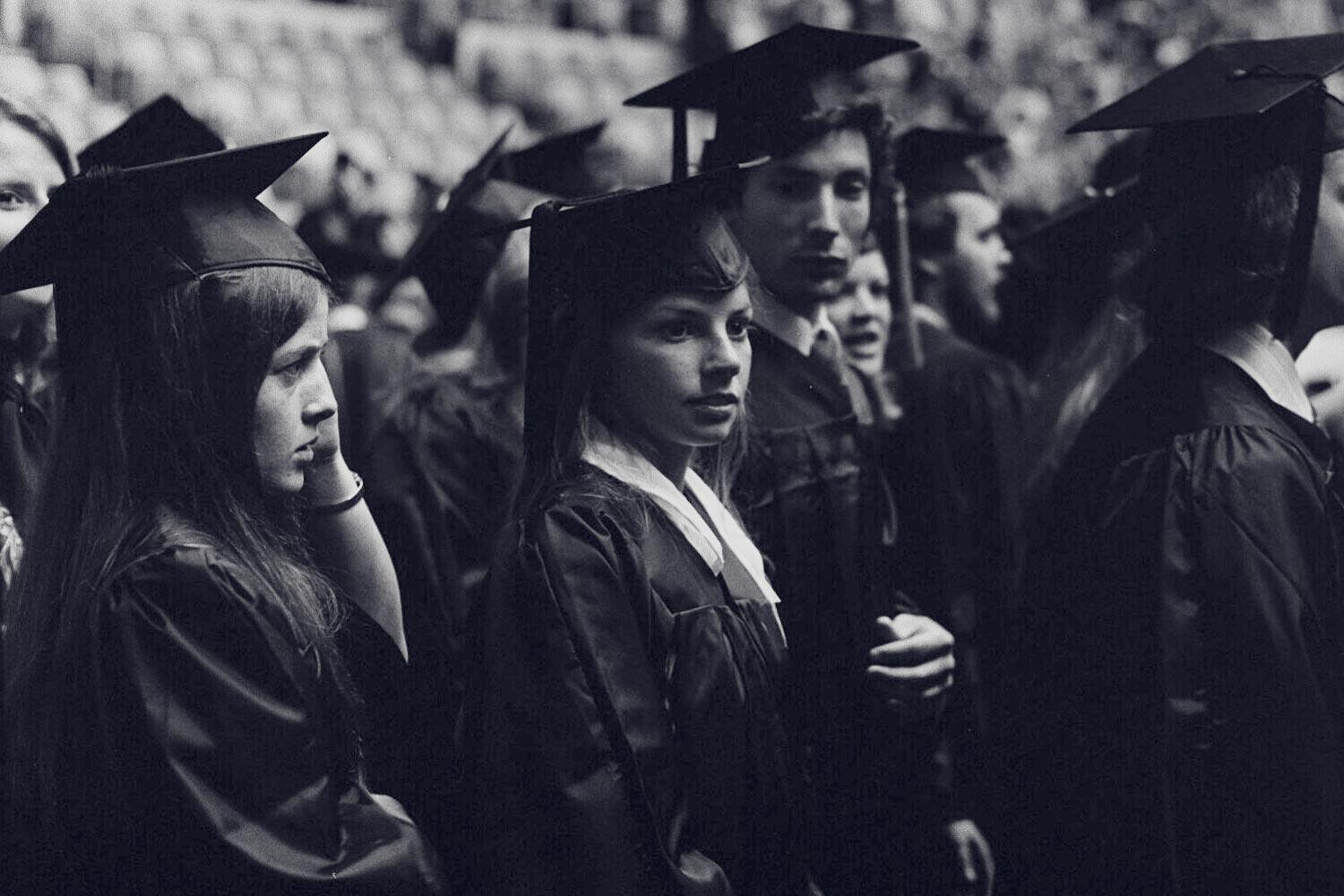 "Co-education will hurt the Honor System, and thus should not be recommended."
UVA Honor Committee (1968)

The year was 1968 and the University of Virginia was one of the last remaining public institutions in the country to admit women. Within the state, William & Mary had become fully coeducational as early as 1918.2 With the prospect of coeducation near, the Honor Committee at the time released a foreboding report with the aforementioned assertion. Two years later, the University began the process of full coeducation and has never looked back.

The conclusions of the 1968-1969 Honor Committee may not come as a surprise in the context of the University’s history surrounding women. Thomas Jefferson wrote in 1818, “A plan of female education has never been a subject of systematic contemplation with me.”3 In 1893, Caroline Preston Davis, who was allowed to study at the University as the daughter of a professor, fulfilled requirements for graduation from UVA. Instead of receiving a typical diploma, hers had the word “graduate” marked through; “certificate on all graduating examinations” was instead written in.4 One year later, the faculty barred women altogether from classes.5 In the early 20th century, the nursing school and graduate programs were opened to women, but the undergraduate college remained exclusively male. Women were allowed to take part in summer programs, but could not apply them towards a degree. The Honor System itself was not immune to the exclusion of women. In 1938, it was ruled that “no women would be allowed to serve on the Honor Committee” following several appeals by women to do just that.6 In 1944, Mary Washington College became the female undergraduate counterpart to UVA. With the national trend towards coeducation, UVA President Shannon appointed Provost Frank Hereford to head a University Committee of Coeducation in 1968.

The University Committee of Coeducation recommended in its majority report a limited installment of coeducation that was pursued by the Board of Visitors in 1969. This plan would have capped the number of female admissions far below those of males with a limited increase over a ten-year span. 7 However, before implementation was set to begin in 1970, the University was sued by a Law School graduate, John Lowe, on behalf of Virginia “Ginger” Scott for the right to apply to the College of Arts & Sciences.7 An injunction was made allowing Scott to enroll in 1969 while the case proceeded to federal court. 7 The Board of Visitors ultimately decided to resolve the case outside of court, agreeing to full implementation of coeducation by 1972. 7 In 1970 and 1971, female admissions numbered 450 and 550, respectively, to allow for University resources to appropriately shift to support both genders. 7 In 1980, the number of female admissions had surpassed male admissions. From 1995 to present, women have been in the majority at UVA.2

In light of the speed with which the University embraced the transition to coeducation once implementation had begun, it is perplexing to consider the concerns raised by the Honor Committee at that time. Tasked with investigating what possible effects coeducation would have on the UVA Honor System, the Committee’s conclusions were supported almost solely by a single publication of social science. Citing statistics showing that peer disapproval of cheating has the strongest effect on rates of cheating at colleges, they concluded that “the more intermingling there is between the men and the women, the less ‘peer disapproval’ there is about honor offenses.”1 The Honor Committee resoundingly denounced coeducation with its final line, “Our principal and final conclusion is that it is not in the best interests of the Honor System to make the University of Virginia co-educational."1

The irony in their conclusions is that the Honor System had already presided over women in the graduate schools throughout the 20th century despite concerns that a gentleman would be unable to hold a woman to its standard. In their report, the Committee noted that two women from the Nursing School were dismissed between 1958 and 1968.1 Although the women only accounted for two of the 124 most recent dismissals, the single sanction was being applied in cases regarding female students. In what may be the earliest record of women being dismissed by Honor, six women were expelled from an unknown program during the summer quarter of 1930.8 Thus, the Honor System had not only governed women for at least 38 years, but had been actively utilized in recent cases against women, calling into question the Committee's assertions that the inclusion of women would lead to the Honor System's demise. Their conclusions are even more paradoxical given their remarks that, “We have no evidence that the Honor System works less effectively in the Nursing School or among the small number of females already at the University than it does among the rest of our predominantly male student body.”1

In contrast to the Honor Committee’s Report, student opinion seems to have been in favor of coeducation. Kevin Mannix, Student Council President-elect in 1969 and the only undergraduate representative on Provost Hereford’s University Committee of Coeducation, went so far as to submit a minority report that was endorsed by Student Council.9 He believed the ten-year coeducation plan originally approved by the Board of Visitors was akin to a quota system, stating, “it will be the University and its students, as well as the women denied admission by a quota system, who will suffer.”9 He then made the recommendation for the full implementation of coeducation by 1972 that was eventually undertaken.

As we approach the 50th anniversary of the court injunction that allowed Virginia Scott to enroll in the College of Arts & Sciences, it is undeniable that coeducation has had an effect on the University and its Honor System. Since women began enrolling in the University in 1970, they have contributed greatly to student government organizations, the Honor Committee included. The Committee elected its first female Chair, Nancy Lyons, in 1981 and its most recent female Chair, Faith Lyons, in 2016. Far from the concerns professed by the Honor Committee in 1968, the Honor System continues to thrive with the added diversity and intellectual rigor brought by generations of female scholars at the University. 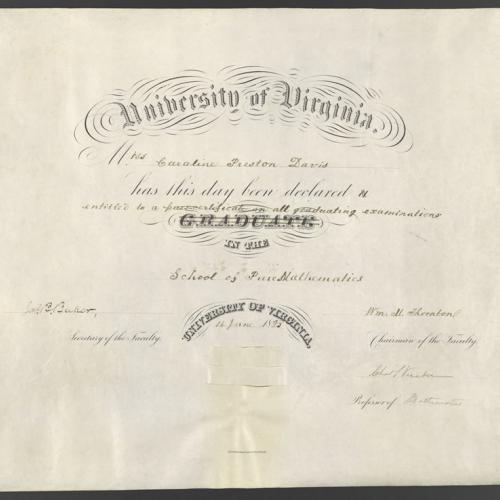 In 1893, Caroline Preston Davis, who was allowed to study at the University as the daughter of a professor, fulfilled requirements for graduation from UVA. Instead of receiving a typical diploma, hers had the word “graduate” marked through; “certificate on all graduating examinations” was instead written in.4 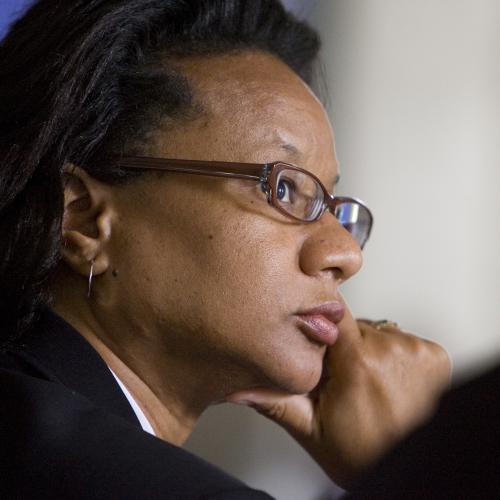 Glynn Key (College 1986 & Law 1989) was the first African-American female Honor Committee Chair (1985-86). A member of the Seven Society and former member of the Board of Visitors, she passed away in 2014. The BOV honored her with a memorial resolution praising her contributions as a Jefferson Scholar, an Echols Scholar, Raven Society Student of the Year, recipient of the Alumni Distinguished Student Award, a member of the I.M.P. Society and the Arts & Sciences Council, a co-founder of Black Alumni Weekend, and a Lawn resident. She also served on the Miller Center of Public Affairs Governing Council and as President of the Alumni Association Board of Managers. On the BOV, she focused on undergraduate life in and outside the classroom, advocated for increased diversity among faculty and students, and is remembered for her sense of humor, her tenacity, and her extraordinary work ethic. 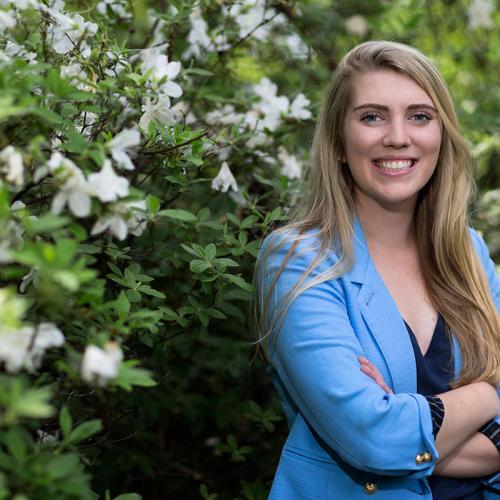 In 1970 and 1971, female admissions numbered 450 and 550, respectively, to allow for University resources to appropriately shift to support both genders. 7 In 1980, the number of female admissions had surpassed male admissions. From 1995 to present, women have been in the majority at UVA.2 Since women began enrolling in the University in 1970, they have contributed greatly to student government organizations, the Honor Committee included. The Honor System continues to thrive with the added diversity and intellectual rigor brought by generations of female scholars at the University. Faith Lyons, pictured above, was the most recent female chair of the Committee.

[2] Gates, E. (Winter 2018). Serpentine timeline: Some of the twists and turns of UVA history. University of Virginia Magazine, Retrieved from http://uvamagazine.org/articles/serpentine_timeline