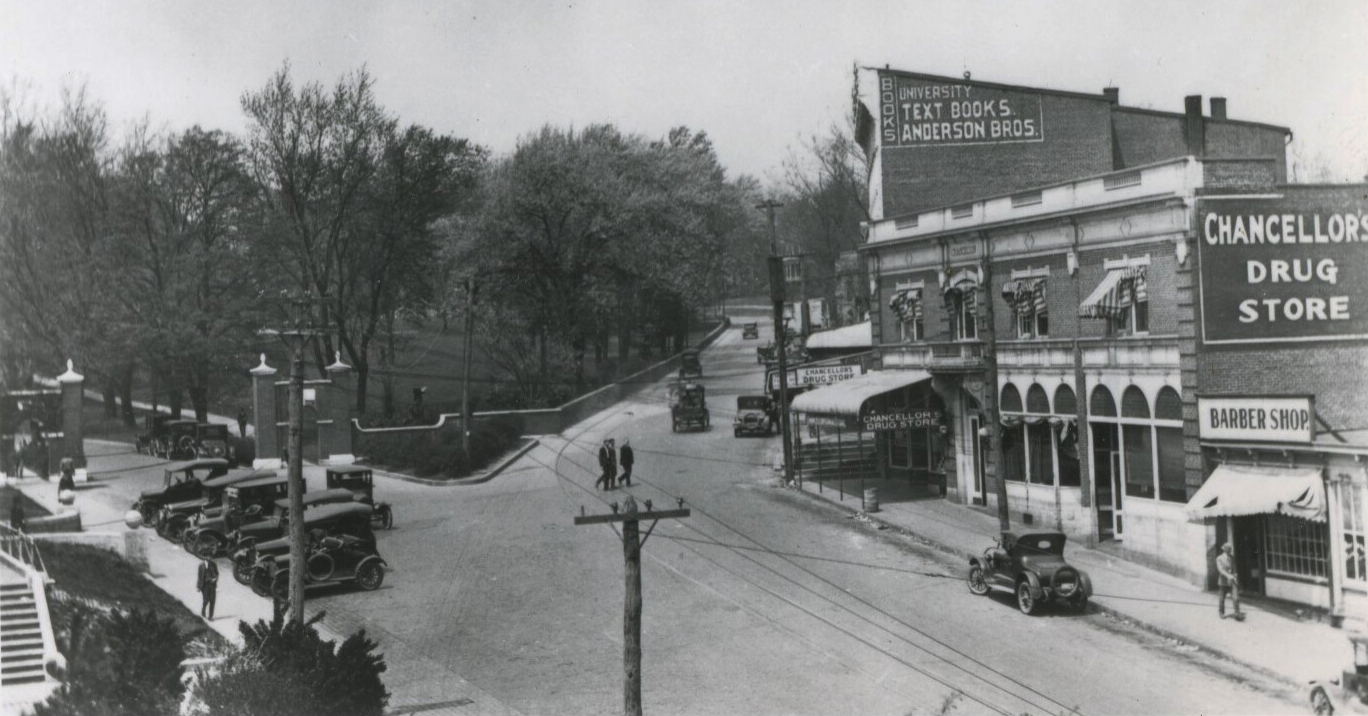 "The Corner 1920-1929" courtesy University of Virginia Library: Special Collections [uva-lib:2167033]
How the Honor Committee once policed students who bounced checks at local merchants - and its new approach to community relations.
Image

Writing checks seems quaint now, especially in the age of digitized finance, but students used to regularly write checks even for relatively small purchases. After all, writing a check for school supplies or food was much more convenient than carrying around cash. However, if students didn’t have enough money in their bank accounts to cover the check, then store owners would be forced to call the police in order to get paid back. By the early 1900’s, more and more students were passing bad checks, buying things without enough money in their bank accounts.

In response to this growing problem, the Honor Committee declared in 1913 that writing bad checks to local merchants would be considered an honor offense. The Committee believed that students who purposely wrote checks without having enough in their bank accounts were acting in bad faith - a form of lying. Students were forced to settle their debts or face consequences from the Honor Committee. A decade later, in 1923, the Honor Committee would formally establish a subcommittee, named the “Bad Check Committee” (BCC), to manage all cases of bad checks. Merchants could report bad checks to the BCC instead of the police, giving students an opportunity to pay back the amount owed without legal consequences.

Originally, the BCC would receive complaints of bad checks from local merchants and notify students that they needed to pay back what they owed. However, students who purposefully wrote bad checks knowing that they had insufficient funds were charged with an honor offense and referred to the Honor Committee, as were students reported for three or more bad checks regardless of intent or knowledge. By the 1950s, this system had fallen out of use and the BCC simply made personal requests to students to pay their bad checks. The BCC covered any remaining debts from its own funds. In 1950, the Cavalier Daily reported that students were passing $150-200 of bad checks per week. The situation came to a head in 1955 when the BCC faced $250 in unpaid bad checks but had less than $100 left in the fund to cover them. In 1956 the Committee decided that any students reported for bad checks that did not resolve them within two weeks would be automatically referred to the Honor Committee.

For the remainder of the 20th century, the BCC functioned as a largely independent organization, distinct from the Honor Committee. It had its own constitution by 1960 and created its own sanction system, including one semester suspensions, checking account suspensions, social restrictions, and fines. During this era, bad checks were not typically treated as honor offenses - the Honor Committee was only involved when students failed multiple times to resolve bad checks, failed to appear before the BCC, or knowingly wrote bad checks. The BCC was integral in maintaining trust between the student body and the community, as bad checks continued to be a major problem for the majority of the 20th century. Both students and local merchants benefited from the BCC’s work, as merchants recouped losses and students avoided legal consequences. By the late 20th century, around 90% of bad check cases came from UVA merchants like Newcomb or The Castle instead of local Charlottesville establishments.